August 1992 – Hurricane Andrew does significant damage to the Spanish Wells Beach Resort.  The primary structure (1 foot thick concrete walls) remain but mostly everything else is ruined.

1997 – Lot Creation – Resort property is converted into multiple lots and the lot that will eventually become Howard Beach House is created.  The remaining walls connecting the structures to the east and the west are bulldozed down to create two two separate structures.  The structure to the west is completely torn down.  The previous owner purchases the property, builds the existing roof and plans to create two, two bedroom living units.  He successfully builds the west side unit but does not complete the east side unit.

2015 – Negotiations to purchase property begin with plans to convert structure into a 4 bedroom luxury beach house. 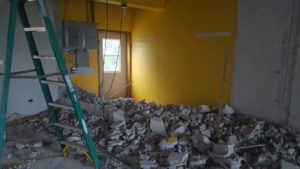 March 2016 – Ceilings installed (in ‘new’ side) and loft created

May 2016 – Hardie Panel Walls installed (note that Hardie Panels are normally used on the exterior but we chose to use them on the interior rather than drywall because of the excellent resistance to moisture.  Board and Batten style is used to cover any seams and to reduce the need for any plastering (that could be affected by moisture)

June 2016 – Sound Insulation (Roxul Safe’N’Sound) installed in all new walls (the existing walls are all solid concrete).  Interior painting completed on new side.

July 2016 – Solar Air Conditioning installed so entire house can be cooled at almost no cost.  Three units that run off power generated by solar panels located on the roof during the day.  They switch to grid power at night but because they are so efficient, they don’t use really use that much electricity.  The total SEER with the solar panels is about >65 (the typical household AC unit is around 15).  That means that overall we use about a tenth of the electricity normal AC does.  Hot Spot Energy is the supplier.

July 2016 – Hurricane Shutters – the old plywood  hurricane shutters did their job very effectively for 20+ years but it was time for an upgrade and they were replaced with new heavy duty corrugated aluminum shutters.

November 2016 – Master Bathroom – installed with double vanities, gorgeous freestanding tub, large walk in shower; both with an amazing view and an ‘outdoor’ experience (still lots of privacy but you can open the large sliding glass doors and feel like you are ‘bathing on the beach’;  New toilets, vanities, mirrors, sinks and showers installed in the two other ENSUITE BATHROOMS.  The powder room gets everything new as well.

December 2016 – Internet upgraded to Revon 20Mb/s cable coupled with TP-Link C9 long range router with 2.4 and 5.0 Ghz bands to be able to reach all corners of the house and to be able to stream and/or download just about anything 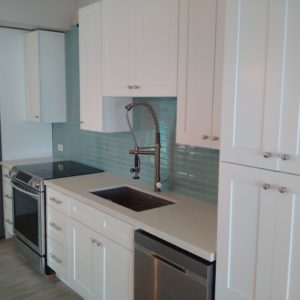 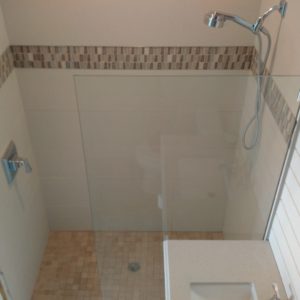 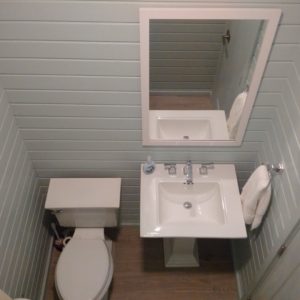 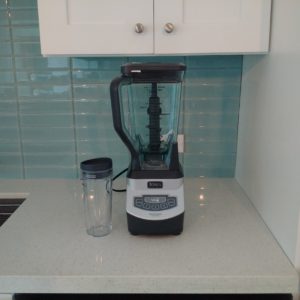 August 2017 Retractable Canopy and Sun Deck built using a ShadeFX retractable canopy.  You can enjoy shade during the day and retract to view the stars in the evening.   Have your family meal using the Ebel Inc. Portofino table, chairs & bench (seating for 8) or soak up some sun on the Laurent Chaise Lounges.  Also added a hammock chair.

November 2017 – Spanish Wells lives up to its name!  Once upon a time, the Spanish filled up their galleons (ladened with gold, no doubt) before heading back across the Atlantic.  We are not Spanish and have no galleons but we drilled a well to supply the house and were rewarded with our ‘gold’;  beautiful clean, fresh and soft water!.  The well is about 10′ deep at the back of our lot (approx. 130′ (40 m) from the beach and amazingly, the water is not salty at all.  We use a small 1/2 hp Flotec pump and a 30 gallon fiberglass Wellmate tank to run everything.  The tank and pump are housed outside so that the noise of the pump does not disturb anyone.  We are still hooked up to ‘city’ water and can use that if necessary but of late, we have found the city service to be somewhat unreliable.  The city water also has lots of brown sediment, is too salty to drink and is extremely hard leaving spots and stains on dishes, shower glass, taps, etc..  We have no treatment on the water so it is not for drinking but is good for washing, laundry, cooking, etc..  Having this source of nice water will just make like a bit more enjoyable and allow everything (that uses water) to last a bit longer.

February 2018 – Removed old outdoor shower and build a larger (from 3’X4′ to approx. 4’X7′) with privacy screen, foot wash hose and plenty of places to hang up towels/clothes/bathing suits. 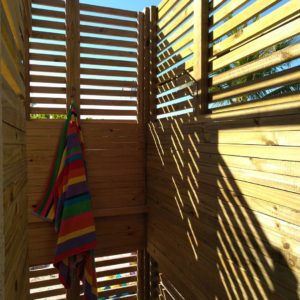 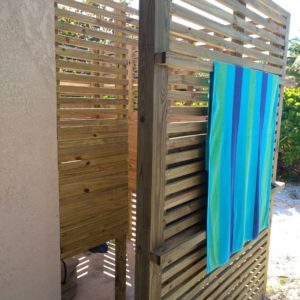 March 2018 – installed a Viqua D4 UV disinfection system and dual sediment filters (a 30 micron and a 10 micron) on the incoming water (either from the City or from the well) in order to ensure that the water is not only completely safe to drink but also has no sediment to clog faucets and shower heads or to stain laundry (the City water was full of iron deposits that would stain white sheets and towels as well as the sink, toilets and tub).  The UV system is an incredibly effective system of ensuring the water is free of bacteria without the use of chemicals.  The water from the tap is tested on a regular basis (every 4 months or so) and it has always tested negative for any bacteria.  Note that the water does have a bit of sulphur in it and if a tap has not been used for a while (such as the one at the tub), there can be a bit of a ‘rotten egg’ smell when the tap is first turned on but the smell goes away almost immediately. 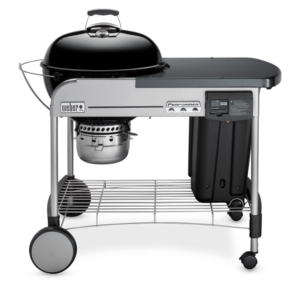 August 2018 – built and installed pressure treated wooden steps  to prevent erosion of the dune in front of the house where the primary pathway to the beach is located.  The steps are nice and wide (8′) with deep treads (about 15″) and shallow (about 5″ per step) 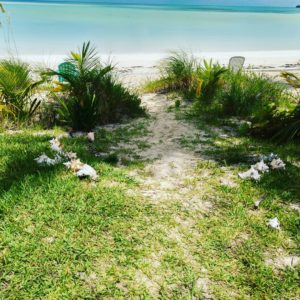 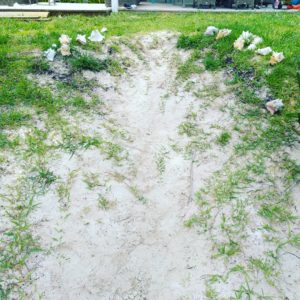 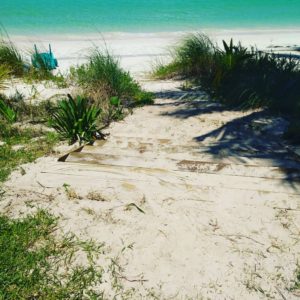 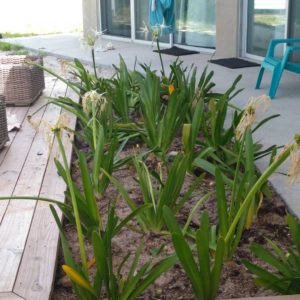 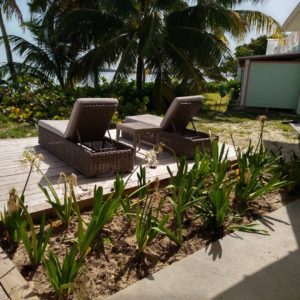 August 2018 – Added a ‘portico’ onto the back of the house (yard side) in order to have somewhere to park/unload a buggy (golf cart) when it is raining as well as a small deck area so that there are nice steps into the house. 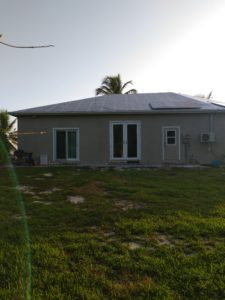 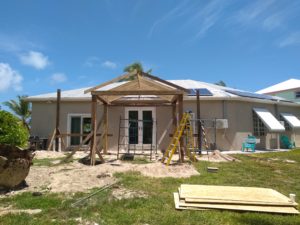 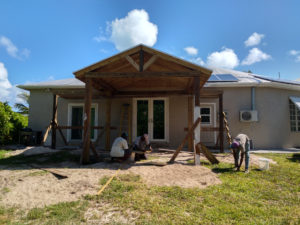 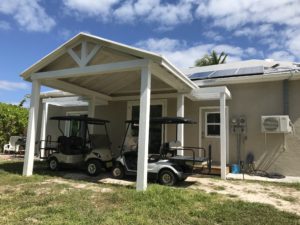 August 2019 – replaced original aluminum frame glass sliding doors with WinGuard Vinyl from PGT.  These doors are ‘top of the line’ with every option possible including low E glass, argon fill, heavy duty stainless steel rollers, heavy duty screen.  The glass is clear so that the natural amazing view of the beach and the sea are clearly visible.  They are also the most hurricane and corrosion resistant doors we could find.  Each of the three sliding doors weighs close to 500 lbs (225 kg) so they are extremely solid but the roller mechanism is extremely smooth.  (I can open with 2 fingers).  The total cost for each of these doors including purchase cost, freight to Spanish Wells, duties, VAT and installation is about U$8,000. Thanks to Vince’s Construction and his team (Clovis, Forest, Louis, et al) for doing such a great job!  Plan is to replace 1 set each year. 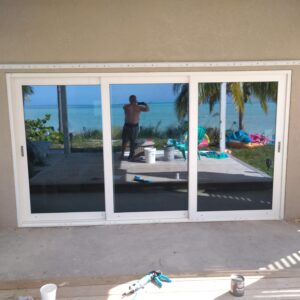 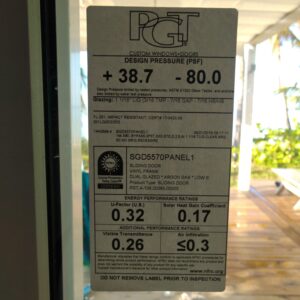 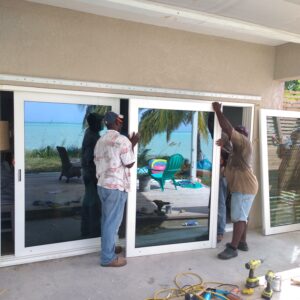 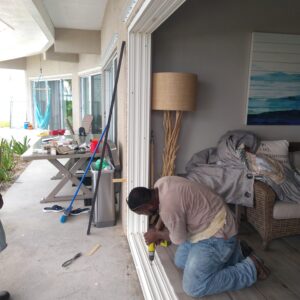 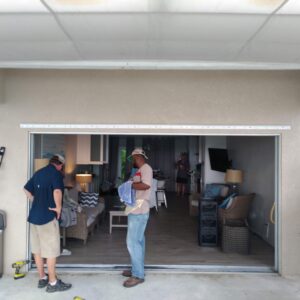 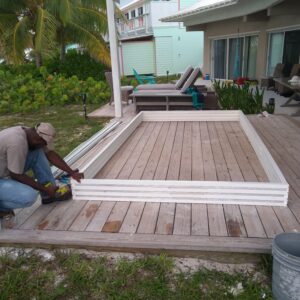 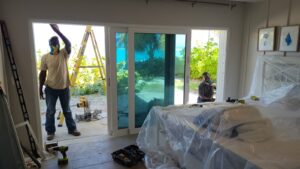 March 2021 – added a ladder to the seawall in order to make it easer to access the beach.  At the beachside, there is a concrete seawall that is about 1′ wide and goes down into the ground by 10 or 12 feet.  The wall runs the full width across the front of the beach (all the way from 13th to 14th Street.  The primary purpose of the seawall is to prevent the erosion of area in front of the beach front houses.  Depending on storms, wind, tides, etc., the height of the beach varies from even to the top of the seawall to about 2-3′ down.  in 2017, the level of the beach was about 1-3′ from the top of the seawall.  During 2019/20, the beach was more or less level with the seawall.  During late 2020 and early 2021, the level was about 1.5 – 3′.  It is currently (April 2021) about 2 steps on the ladder down to the beach or if you sat on the seawall, your feet would touch the beach.    The ladder is corrosion resistant anodized aluminum and has smooth rounded edges and wide steps so it is easy on the feet. 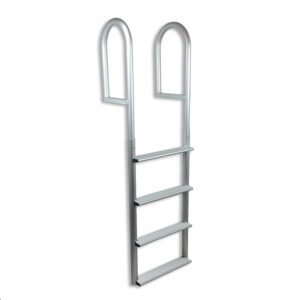 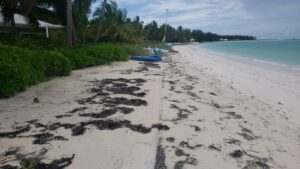 March 2022 – repaired old and installed a new aluminum standing seam roof. The standing seam roof has shown exceptional durability; especially in hurricane prone areas. After hurricane Dorian in 2019, most of the standing seam roofs remained intact. Aluminum was chosen over steel because of the corrosion resistance to the salt environment. The metal panels were formed on-site and installed by Well Done Drilling Services (WDDS) of Spanish Wells. The previous roof was a Peel & Seal industrial membrane made by MFM Building Products. The roof lasted over 25 years but had lots of patches and was ready for replacement. The new white roof reflects the heat of the sun much better with the temperature of the new white aluminum roof about 10-15°F (5-8°C) cooler than the old roof. This reduction significantly lowers the load on the air conditioning system. The standing seam cost was about 30% more expensive than a conventional high quality asphalt shingle but the much better durability and the better reflectance made the standing seam a much better choice for the longer term. The standing seam design is also a perfect match with solar panels because the seams can be used as mounting rails for the panels.

A portion of the beach side of the roof at to be rebuilt as well. The original roof construction actually dipped down slightly. This would have caused the more rigid aluminum panels to buckle. The front valley was moved slightly to the east. Several sections of plywood were replaced as well because they were slightly rotten at the front edge. All of the plywood used was pressure treated.